Inuvik, Northwest Territories, Canada is the administrative and commercial centre of the Western Arctic.

Due to its northern location, Inuvik experiences approximately two months of continuous sunlight every summer and 1 month of polar night every winter.

Inuvik has a subarctic climate with temperatures that vary wildly due to its location near the Arctic Ocean. Seasonal transitions are extremely short. Freezing temperatures and snowfall can occur any month of the year.

Inuvik hosts a large airport capable of serving a wide range of commercial, military and civilian operations. The Inuvik Airport is the largest in the region and has the only paved runway north of the Arctic Circle.

Despite its remote location, Inuvik is also accessible by road and waterway for most of the year.

Inuvik also has access to the Arctic Ocean along the Mackenzie River delta by boat in the summer and ice road in the winter. Commercial barge service extends south as far as Great Slave Lake and north to the Beaufort Sea.

When land and water transport become unreliable during the autumn freeze and spring thaw, air travel becomes the only reliable means of transportation for goods and personnel. As such, air travel remains the primary method of civilian and commercial transport.

Inuvik was built by the Canadian federal government in the 1950s to serve as a base for Arctic development and government administration.

Although Inuvik has a population of just over three thousand people, the town provides services, facilities and resources to a multitude of communities across the Western Arctic.

Despite its low population, Inuvik maintains an impressive modern infrastructure with facilities and resources to allow both visitors and residents to conduct almost any commercial operation.

Inuvik residents have access to all levels of educational institutions including a college campus and numerous research facilities.

Inuvik residents also enjoy the amenities of a large recreational complex which features a large pool, a hot tub, a sauna, a steam room, several squash courts, three curling surfaces, an ice rink and a community hall. The on-site business centre offers full wireless internet access and can host trade shows with up to 1200 delegates.

Inuvik maintains a strong police and military presence. The community is home to a large detachment of Royal Canadian Mounted Police as well as a military base for the Canadian Armed Forces (CFS Inuvik).

Communications services in Inuvik are by far the most reliable in the Western Arctic. Landline telephone service, cable television, cellular service and internet plans are available from a number of providers.

High speed internet is backed by a fibre optic link that stretches 1,200 km south through the Mackenzie Valley with an additional fibre link is being installed along the Dempster by 2023.

The fibre optic link has facilitated the development of several private and public projects in the information technology and communications sectors. For example, Inuvik has become a international hub for satellite ground stations.

Other commercial enterprises in Inuvik include resource exploration and tourism.

The main language spoken in Inuvik is English. 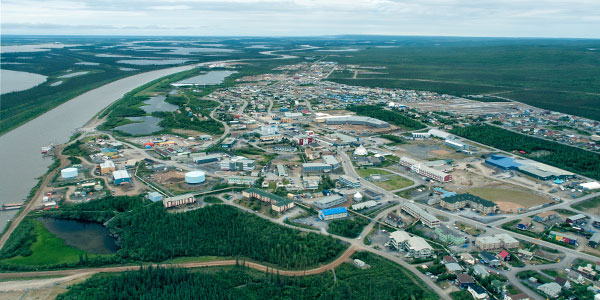 Inuvik maintains an impressive modern infrastructure with facilities to support a wide range of civilian, military and governmental operations.